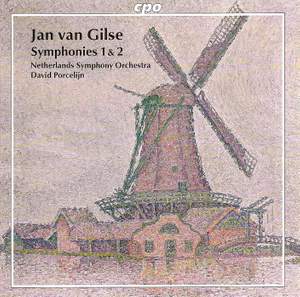 Gilse: Symphony No. 1 in F major

CPO has already uncovered gems from Röntgen and Badings, and now they add a third name to their exploration of little known Dutch composers: Jan van Gilse. Van Gilse’s music is only now being rediscovered. During his lifetime, it was Richard Strauss who valued and praised his music the most. Strauss tried persuading him to enlist on the international level for worldwide rights for composers in an attempt to get van Gilse’s music more widely acknowledged. However, at that point in time van Gilse had spent time traveling back and forth from Germany and Holland, so he turned down the offer fearing the Nazi’s would use him for their own purposes, thus preventing his music from getting the attention and praise it deserved. His opposition to the new German government meant that his music was discredited and forgotten about. Now at last van Gilse is receiving the rehabilitation he deserves. Standing firmly on the foundation of tonal late romanticism, this is music of glistening beauty.

…the symphonies here… are well made, attractive to the ear and substantial concert items. David Porcelijn directs fine accounts and the Netherlands Symphony Orchestra respond warmly to the music.