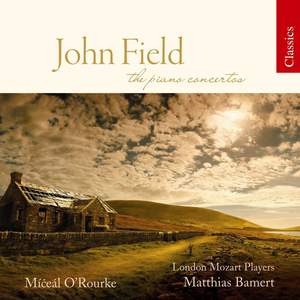 O’Rourke seems to have adopted the style of Field himself; he has a lovely touch and flow. — American Record Guide More…

Field: Divertissement No. 1 in E major

Field: Rondo for Piano in A flat major, H 18

Field: Quintetto in A flat major

Field: Divertissement No. 2 in A major

The popular and critically admired Chandos recordings of John Field’s expressive cycle of Piano Concertos are brought together for the first time as a limited edition 4-CD set and released at the price of only 2 CDs.

A major forerunner of the Romantic school of pianism that culminated in Chopin, Dublin-born pianist and composer John Field had scarcely received his due until Chandos released the performances of the Piano Concertos by fellow countryman, Miceal O’Rourke.

O’Rourke seems to have adopted the style of Field himself; he has a lovely touch and flow.

all praise to those responsible…

O'Rourke and his partners capture Field's spirit and style to perfection, warmly recorded in a natural acoustic.

The music of these concertos is uneven, but they are all easy to enjoy and most have their fair share of winning themes...O'Rourke is very persuasive and he receives admirable support...the serene single-movement Piano Quintet is also delicately charming.

Field’s star is currently shining brighter than ever, thanks in no small measure to the partnership of pianist Miceal O’Rourke and the Matthias Bamert-led London Mozart Players