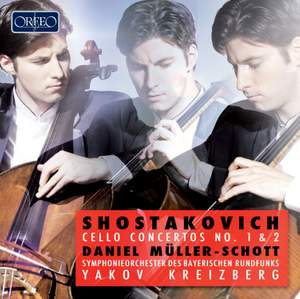 From the very outset, there's a real sense of urgency about the performance, Müller-Schott's razor-sharp articulation in the outer movements managing to combine rhythmic incisiveness with highly... — BBC Music Magazine, Proms 2008, 5 out of 5 stars More…

Even though both the First Cello Concerto Op. 107 of 1959 and the Second Cello Concerto Op.126 of 1966 were written after Stalin's death in 1953, the threat of Soviet dictatorship and censorship continues to be palpable.

With the Bavarian Radio Symphony Orchestra under Yakov Kreizberg, Daniel Müller-Schott offers an exemplary interpretation of both concertos that also does justice to the peculiarities and details of their instrumentation, notably in the second movement of the Second Concerto, in which Shostakovich uses a popular song from the time of the Russian Revolution to produce a grotesque dance with dissonant fanfares. No less typical of Shostakovich are the reminiscences of composers such as Mussorgsky and the set of variations in the final movement of the Op. 126 Concerto, written at a time when the composer was already marked out by death, a piece described by Daniel Müller-Schott as "perhaps the most emotionally multilayered of all cello concertos", the abrupt ending of which is as disturbing as it is profoundly moving.

From the very outset, there's a real sense of urgency about the performance, Müller-Schott's razor-sharp articulation in the outer movements managing to combine rhythmic incisiveness with highly charged delivery. The orchestra under Yakov Kreizberg provide superb support throughout. If anything the Second Concerto is even more impressive.

With roughly a dozen single-disc couplings of the two Shostakovich cello concertos available on CD, a new one needs a sharp profile in order to gain visibility. Müller-Schott and his supporting team have most of the obvious credentials: technique and temperament in abundance, finely judged tempi, and excellent recorded balance and perspective, the soloist placed a little further forward than in some versions, but not distractingly so. They bring dash, drive and discipline to the fast movements, and soulfulness to the slow ones. But the trick with Shostakovich is to combine those things with weight of tone and flashes of personal expression, so that the drama of the individual caught up in the machinations of larger forces gains life-or-death significance.
How that is achieved is a matter for debate and legitimate disagreement. For all Mischa Maisky's special touches of romantic eloquence, he comes up with some bizarre technical fudges in the big cadenzas, while Heinrich Schiff is far more direct but so fast and furious in the first movement of the E flat First Concerto that it loses as much in stoical defiance as it gains in physical excitement. Müller-Schott's tempi and characterisation are more central, and as a modern alternative to Rostropovich they take the lead, also because there are a number of telling passages in Kreizberg's accompaniments.

The dark-hued and deeply introspective Second remains an elusive, enigmatic work, and it's Daniel Müller-Schott's masterly performance of that which makes this disc especially impressive. Müller-Schott studied the two concertos with Rostropovich, but his tempi for the second are much slower than his teacher's so that the work's sombre subtext - the soloist as the creative artist, pitted against the repression of the Soviet state represented by the orchestra - is impossible to ignore with a finale that ends, like Shostakovich's 15th Symphony, with the death rattle of ticking percussion. Yakov Kreizberg and the Bavarian Radio Symphony provide outstanding support.

As Daniel Müller-Schott intimates in his own perceptive booklet note for this release, the two Shostakovich cello concertos, although separated by just seven years, inhabit very different worlds. Müller-Schott reflects this in his cello-playing: where No 1 still has an element of post-Stalinist optimism about it, to No 2 he brings home the desperation of the composer's situation, beset with heart and neurological illness.
The soloist is set well forward in the aural picture, which emphasises Müller-Schott's eloquent tone and expression, but Yakov Kreizberg and his orchestra play their own part, with particularly vivid percussion in the Second Concerto. A gripping disc.

Müller-Schott manages the singular trick of keeping his cello tone rich and gorgeous without lessening the music’s ability to stab the heart. Listen to his lonely eloquence as he climbs up the first concerto’s second movement, and the eerie shiverings at its peak, when cello harmonics join hands with the celesta in an unearthly duet. The second concerto receives an equally febrile performance.