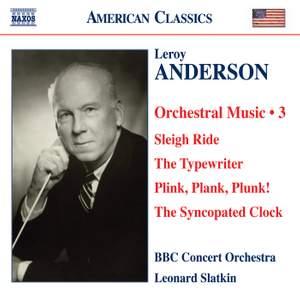 This volume has its quota of favourites – Plink,Plank, Plunk!, Sandpaper Ballet, Sleigh Ride, TheTypewriter and The Syncopated Clock among them, though there are also several pieces never before... — Gramophone Classical Music Guide, 2010 More…

Anderson, Leroy: Of Thee I sing: Wintergreen for President

Leroy Anderson etched out his own unique place in American music – a composer rigorously trained in the classical tradition whose records topped the pop charts, a meticulous arranger of music whose own melodies were crafted with inventive precision. Here, in the first complete cycle of Anderson’s orchestral music, the Anderson family has made available several pieces that the composer did not release, with some first recordings scattered among the familiar and not-so-familiar titles. Volume Three includes the notorious musical gem The Typewriter, in which the machine is transformed into a relentlessly busy percussion instrument, the tasteful and soul-satisfying Suite of Carols for Brass Choir, and Anderson’s biggest hit, Sleigh Ride.

This volume has its quota of favourites – Plink,Plank, Plunk!, Sandpaper Ballet, Sleigh Ride, TheTypewriter and The Syncopated Clock among them, though there are also several pieces never before recorded. Mother's Whistler especially is so immediately engaging that one can only wonder why. Though the charm of other pieces such as Melody on Two Notes may be less immediate, it is ultimately hardly less real.
Of the rest, Harvard Sketches is a successor to the Harvard Fantasy that first attracted Arthur Fiedler to Anderson's gifts in 1936. Like Vol 2, this also has its share of Anderson adaptations, including one of his suites of carols – this time for brass – and three straight arrangements.
Perhaps “straight” is not an apt description, though, in so far as Anderson was ever one to add his own distinctive twist. In Old MacDonaldHad a Farm he introduces some distinctly comical additional effects, while in Seventy-Six Trombones he cleverly highlights the debt Meredith Willson owed to the marches of Sousa.
Performances are technically and interpretatively outstanding, with utmost fidelity to the style and tempi of Anderson's own recordings.
Richard S Ginell's notes add to our appreciation of a composer too readily taken for granted.

The winning Anderson formula continues… Performances are technically and interpretatively outstanding, with utmost fidelity to the style and tempi of Anderson's own recordings.