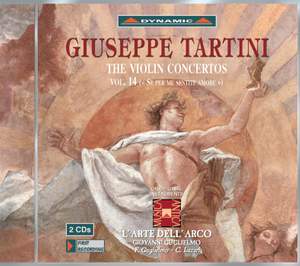 Se per me sentite amore

This is the 14th Volume of Dynamic’s Tartini Violin Concertos, which include the world première recordings of Concerto in C Major D7 and Concerto in A Major D 103 on Disc 1, and all the concertos featured on Disc 2. The concertos featured on this two CD set are from what is known as Tartini’s second period of composition, where his style had developed in instrumental maturity, enriched by nuances of style gallant and Milanese symphonic writing. He was able to successfully sustain his own style, without being too heavily influenced by Vivaldi, who lived and worked nearby. The works are performed by the Arte dell’Arco musicians who treat the works with great care and respect, keeping as close to the original score as possible. They worked with the original manuscripts that are no longer available to the public and perform on original instruments.