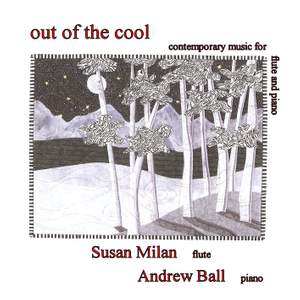 Offer, Out of the Cool

I. Paper sea and silver coins

II. Black with shadow and wolves

David Heath: Out of the Cool

Although it enjoyed relatively greater prominence in France during the late nineteenth and early twentieth centuries, the repertoire for flute and piano has readily come into its own in Britain during the post-war era, not least because numerous flautists have taken a decisive role in the works that they have commissioned as well as with the composers that they have championed. One such artist is Susan Milan, whose unfailing advocacy has led to several of the compositions to be heard on the present disc – three of which are receiving their first recordings.

In 1974 Susan Milan was appointed Principal Flute of the Royal Philharmonic Orchestra where she remained for eight years. Since then she has continued to have a multi-dimensional career as an orchestral guest principal, chamber musician, soloist, teacher and lecturer. In Great Britain she has performed concertos with all the major orchestras and she tours frequently throughout Europe, USA, Australia and the Far East.

She has given numerous world and UK premières and has inspired contemporary composers to write for her, among them Richard Rodney Bennett, Antal Dorati, Carl Davis, Jindrich Feld, Edwin Roxburgh, Robert Saxton, Ole Schmidt, Brian Lock Robert Simpson and Cecilia McDowall. She has recorded the Schmidt Concerto for the Da Capo label.

Recent commissions and dedications include a concerto from American composer Keith Gates, “Oiseau Soleil” by Jean Sichler, and three works by British composers "The Moon Dances" by Cecilia McDowall, the Flute Sonata by Brian Lock and "Octagon" by Ian Finney. Susan Milan is often heard on the BBC and has previously recorded for Chandos, Hyperion, Omega, Da Capo, Upbeat and Cala labels.

Andrew Ball studied at the Royal College of Music and at Queen’s College, Oxford. Regarded as one of the foremost British pianists of his generation, a busy career has taken him all over the world. He has a reputation for innovative and imaginative programmes, and chamber music and contemporary music have always played a large part in his repertoire.