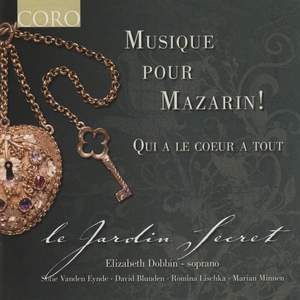 Qui a le coeur a tout

Continuing its work with young artists, CORO has the pleasure of announcing Musique Pour Mazarin! the debut recording by Le Jardin Secret, winners of both the first prize and audience prize at the Early Music Network Young Artists Competition 2007.

This talented young ensemble consisting of soprano, harpsichord, theorbo, viola da gamba and baroque cello, present a delightfully varied programme featuring a diverse mixture of French and Italian music that would have been heard at the court of the flamboyant Cardinal Jules Mazarin.

The juxtaposition of French and Italian works on this disc shows clearly the rich selection of music heard at Mazarin’s court in the late 1600s. They demonstrating the stark contrast between the French and Italian styles of the period with the added ingredient of political and cultural rivalry and intrigue - the Italian born Cardinal importing Italian culture into a resistant French context - contributes a little "piquancy" to the mix!

It is a great pleasure to welcome this first-class debut disc, which suggests that Le Jardin Secret have a very bright future indeed. The imaginative programme, inspired by the clash of French and Italian musical cultures at Cardinal Mazarin's court, contains much beautiful and unfamiliar music, and the performances are superb.