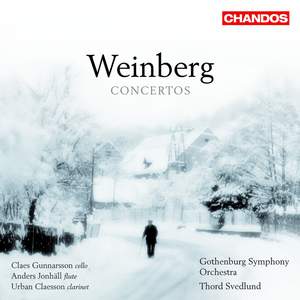 Appreciation of the Polish-born Mieczyspaw Weinberg has increased markedly over recent years. This collection of four concertos covers a fair proportion of the composer's maturity. The Cello... — Gramophone Classical Music Guide, 2010 More…

Much neglected until recently, the Polish-born Mieczyslaw Weinberg is now finding his rightful place in the pantheon of great twentieth-century composers, with a substantial increase in recordings and performances of his works. Our series of symphonies has contributed significantly to this reappraisal, and Chandos now adds four of his concertos to its catalogue. Weinberg’s music is full of orchestral colour and rhythmic energy. Shostakovich was his most important influence, and a close friend, describing him as ‘one of the most outstanding composers of the present day’. His music is reminiscent of Shostakovich’s, but with strong elements of Jewish folk music and klezmer.

The four works recorded here cover his middle and late period, after Weinberg had escaped from Nazi-controlled Poland and settled in the Soviet Union. He was in a deeply troubled state, having lost much of his family in the Holocaust, and his association with some of the finest conductors and instrumental virtuosos of the country was to prove a vital source of moral support; all four works were written with such friends in mind. The Fantasia for Cello and Orchestra was composed in 1951 – 53 and dedicated to the composer Yuri Levitin, a pupil of Shostakovich and one of Weinberg’s closest friends. Completed at the very beginning of the post-Stalin thaw, it displays a relaxed, tuneful style, with wonderful melodies of folk-like character. The virtuosic Concerto for Flute and String Orchestra, composed in 1961, is dedicated to the famous flautist Alexander Korneyev. Its comparatively dark mood relates it to Nielsen’s Flute Concerto. Complementing these works are two fascinating discoveries. Weinberg left writing a Second Flute Concerto until much later; in fact, it was one of his last compositions. Dating from 1987 and also dedicated to Korneyev, it here receives its world premiere recording. Its style is quite different from that of the first Concerto, more classical, rather in the manner of Richard Strauss. Its first known performance was given in 2001, with the present soloist and conductor. The Concerto for Clarinet and Orchestra, composed in 1970 and also receiving its first recording, confirms the affinity for the instrument that Weinberg had shown throughout his career. David Fanning calls it ‘a gem of a work awaiting discovery’.

Appreciation of the Polish-born Mieczyspaw Weinberg has increased markedly over recent years. This collection of four concertos covers a fair proportion of the composer's maturity. The Cello Fantasia (1953) is a deftly through-composed design recalling the Myaskovsky Concerto in a melodic directness that yet conceals considerable expressive depths. The flute concertos are both lighter in content though not necessarily in manner: No 1 (1961) places its ruminative passacaglia between movements whose effervescence is often tempered by the ambivalent strains of klezmer, while No 2 (1987) places a brooding Largo between an Allegro that elides, Nielsen-like, between its frequently conflicting ideas and a finale whose valedictory allusions to the music of others are fitting in the context of one of Weinberg's last works.
Yet it is the Clarinet Concerto (1970) that is the real discovery here. On a substantial scale, it allows the soloist subtle dominance against a string orchestra that, in the first movement, evinces a sparseness often redolent of (though not indebted to) late Shostakovich and which, in the Andante, blends austerity with poetry to touching effect – before a finale whose dancing gait prevails in the face of more disruptive elements.
The soloists are finely attuned to their respective concertos, and Thord Svedlund secures an incisive response from his Gothenburg forces. Excellent sound and a welcome addition to the Weinberg discography.

… it is the Clarinet Concerto (1970)… is the real discovery here. …it allows the soloist subtle dominance against a string orchestra that, in the first movement, evinces a sparseness often redolent of… late Shostakovich and which, in the Andante, blends austerity with poetry to touching effect...