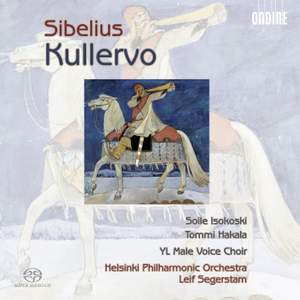 For epic grandeur and excitement Rasilainen remains first choice. But Segerstam's more poetic, even reflective reading is a compelling alternative.

As a fine Wagner conductor Leif Segerstam knows something about pacing and maintaining a strong rhythmic profile over the longest spans of musical narrative, and for all the composer's vaunted debt to Bruckner in the instrumental movements, a grander, operatic sweep seems more germane to this always intriguing, sui generis hybrid of symphonic poem, symphony and cantata. Segerstam's second cycle of the numbered symphonies has at points such as the Seventh come a cropper with such largesse of gesture and tempo, but like Segerstam's first recording (Chandos – now available as a download only), is refreshingly straightforward with sound and well chosen tempi. Perhaps partly due to a superbly contoured recording, but also the more keenly expressive responses of the Helsinki orchestra, especially its woodwind, the many transitions in the work seem to count for more, and in 'Kullervo's Youth' achieve a Mussorgskian abruptness and intensity.
That first recording was also graced by Soile Isokoski in the part of Kullervo's raped sister, but here she surpasses herself in creating a selfcontained scena for her third-movement lament, vibrant and enticing before turning bitterly eloquent over her shame. Tommi Hakala and the YL Choir bring a complementary, sappy youthfulness.
If the finale rather goes off the boil, the composer must take some of the blame; Isokoski too, for stealing the show with a contribution to this over-recorded work which deserves to win currency outside connoisseurs of early Sibelius.

Leif Segerstam knows something about pacing and maintaining a strong rhythmic profile over the longest spans of musical narrative… …Soile Isokoski in the part of Kullervo's raped sister… surpasses herself - and, I think, anyone else I've heard - in creating a self-contained scena for her third-movement lament, vibrant and enticing before turning bitterly eloquent over her shame.

Leif Segerstam's performance joins the pantheon of outstanding Kullervo recordings. As one would expect from this quirkily fascinating conductor-composer, his reading takes a different line from the conventional approach to this strange hybrid work...Rather than adopting a monolithic "symphonic" approach, Segerstam emphasises the inherent drama and the protean nature of the whole work. The theatricality is not confined to the incestuous central duet between the hero Kullervo and his sister, sung here with thrilling operatic intensity by Soile Isokoski and Tommi Hakala, but spreads into the outer orchestral movements, too. If conductors such as Osmo Vänskä show Kullervo to be the starting point for the later, purely symphonic journey Sibelius undertook, the Segerstam reveals possibilities in the work that were never followed up, and which would have taken the composer into a different world altogether.

This latest wholly Finnish production is up there with the best. It reminds us what an audacious work this five-movement quasi-symphony was for its 27-year-old composer, with its pounding rhythms, powerful choral writing and broad range of atmospheres. Leif Segerstam commands these elements with true authority, and the Helsinki Philharmonic responds with playing, by turns elemental and delicate.
Soile Isokoski, a soprano who in her vocal edge and intuitive sense of communication can bring to mind Elisabeth Söderström, is a dramatically perceptive foil to Tommi Hakala's appropriately brazen but vocally polished Kullervo.