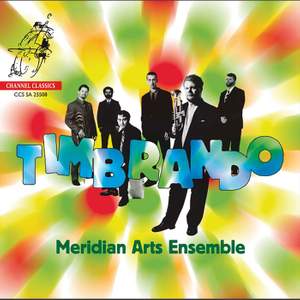 Villa-Lobos: Bachianas Brasileiras No. 1 for at least 8 cellos

This is our ninth CD, and it is being released in the year of our twentieth anniversary. The CD is a travelogue of sorts, containing music we picked up on tour around Latin and South America and in the US. Several of the pieces on this disc were commissioned for our visit to the Subtropics Festival in Miami – a city that is a great crossroads of Latin culture – in 1997. Other pieces we collected in foreign places or from friends we made in those places. We have brought all this music to our home base, New York, another cross-cultural gathering place. And now to listeners wherever they may be. Timbrando is Portuguese for ‘making a tone’ or ‘sounding’ (it is related to the word ‘timbre’).