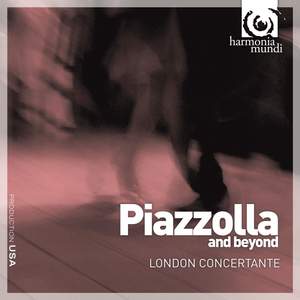 London Concertante demonstrates extraordinary versatility for a classical ensemble...Their skill is summed up in Michelangelo 70, a dramatic performance of feather-light virtuosity that is so... — Charlotte Gardner, bbc.co.uk, 4th November 2009 More…

More than any other composer since J. S. Bach,Astor Piazzolla achieved the ultimate synthesis of the musical influences acting upon him - from Bach to jazz to classical music of his contemporaries - while remaining true to his Argentine roots. In this dazzling programme, London Concertante goes 'beyond' Piazzolla classics and introduces four newly written works by David Gordon and Adam Summerhayes that pay homage to the master.

London Concertante enjoys an enviable position in the world of classical music where it is regarded as one of the finest chamber ensembles in Europe - a position it has spent the last 17 years striving to maintain. Begun in 1991, the ensemble quickly garnered praise both here and abroad and now gives around 100 concerts a year all over the world. As well as performing regularly for music clubs and festivals in the UK, in the first part of 2008, London Concertante toured to the USA, Cyprus and will be giving concerts in Spain and Turkey later in the year. The group's first release on the Chandos label ("Gypsy Strings") came out to unequivocal critical acclaim. The success of the London Concertante owes much to the exceptional talents of its players, inspired programming by its Artistic Director, Chris Grist, and thrilling leadership under the internationally renowned violinist, Adam Summerhayes.

"played with silky-toned elegance….extraordinary unanimity. The London Concertante members, fine chamber musicians that they are, played with an uncanny clarity of texture…quite exquisite." The Strad

"Drum-tight. This is superb chamber playing" The Scotsman ****

"Quality musicians. Quite excellent…pursuing each new pulse with the unanimity of a shoal of fish. [They] play with tone as soft as velvet, bow strokes that really sing and a Romanticist's wide volume range." Evening Standard

London Concertante demonstrates extraordinary versatility for a classical ensemble...Their skill is summed up in Michelangelo 70, a dramatic performance of feather-light virtuosity that is so tightly together that it would feel inhuman if there weren’t so much soul in the playing. Bravo.