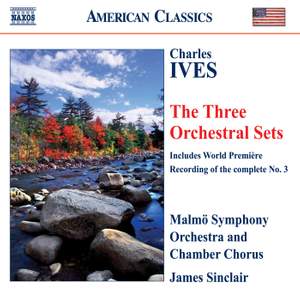 James Sinclair leads excellent performances. The Malmo Symphony sounds comfortable in the American idiom, and the recording is spacious, sweet sounding in the strings…You should have the Naxos... — American Record Guide More…

I. The St Gaudens in Boston Common (Col. Shaw and his Colored Regiment)

III. The Housatonic at Stockbridge

I. An Elegy to Our Forefathers

II. The Rockstrewn Hills Join in the People's Outdoor Meeting

III. From Hanover Square North, at the End of a Tragic Day, the Voice of the People Again Arose

II. An Afternoon, or During Camp Meetin' Week - One Secular Afternoon (in Bethel) (ed. D.G. Porter)

The works on this recording focus on a singular genre created by a singular composer. The kind of piece Charles Ives called a ‘set’ is usually a larger work made by putting together independently-written smaller pieces. The First Orchestral Set, variously titled Three Places in New England and A New England Symphony, is one of Ives’s great tributes to his roots. Put together around 1913-14 from material going back years, it is typically Ivesian in that each movement has an underlying program. Like the other sets, the Second has a slow-fast-slow pattern and a visionary hymn-based finale. The unfinished Third Orchestral Set was the only set Ives planned as a whole from the beginning. It may stand as the most profound discovery of the many and ongoing efforts to reconstruct Ives’s incomplete works. This is its first complete performance and recording

James Sinclair leads excellent performances. The Malmo Symphony sounds comfortable in the American idiom, and the recording is spacious, sweet sounding in the strings…You should have the Naxos regardless of what other Ives recordings you have.

This is a fascinating release that offers Ives's three Orchestral Sets for the first time. The curtain is raised with the first of them, ThreePlaces in New England, in its original version – this stands somewhere between the CountryBand March and the later, more familiar ThreePlaces. At this stage there's no piano part and the conflicting march rhythm in 'Putnam's Camp' is missing as well as its dissonant opening. Both the First and Second Sets are vintage Ives, with his unforgettable reaction to the sinking of the Lusitania that brought the US into the First World War at the end of the Second Set.
But the novelty here is the Third Set. The first two movements come from sketches edited by David Gray Porter. The opening Andante has a structure similar to Central Parkin the Dark with typical Ives chords and a texture building to a crisis with something left hanging softly at the end. The second movement is called 'During Camp Meetin' Week: One Secular Afternoon'. This again is Ives's idiosyncratic territory with lots of quotations including 'Columbia the Gem of the Ocean' twice and a four-part hymn about the Day of Judgement – not so secular after all? Completing works by Ives has become an industry that the composer would have welcomed.
The perhaps over-extended last movement of this Third Set, realised by Nors Josephson, at times sounds like Varèse, although it begins and ends softly. Well recorded, idiomatic performances all round – a real Ives discovery.

Well recorded, idiomatic performances all round - a real Ives discovery.