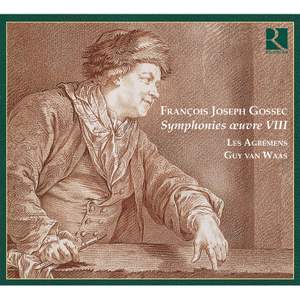 Ricercar present a second recording devoted to the composer who can rightly be considered as the father of the symphony in France: François Joseph Gossec.These three Symphonies Op.VIII proclaim their modernity through their use of clarinets and of a Minuet and Trio, this being rare in Paris at that time. Gossec, who had been born in Hainault in Belgium, also mastered the styles of his adopted land: the ballets in his tragédie lyrique Sabinus can be placed directly in the orchestral tradition of J.P. Rameau, the eminence grise who had welcomed Gossec to the French capital in 1751.