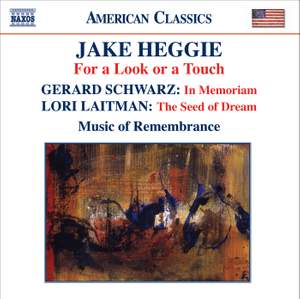 Prelude: Do You Remember?

The Story of Joe

Laitman: The Seed of Dream

No. 4. Beneath the Whiteness of Your Stars

Based on the true story of two teenage lovers the Holocaust tore apart forever, the dramatic song cycle For a Look or a Touch casts long-awaited light on the fate of gay Germans in the Holocaust. By noted young American opera composer Jake Heggie and librettist Gene Scheer, the work juxtaposes the exuberant freedom of pre-World War II Berlin with the brutal Nazi horrors that followed, while making an eloquent, poignant plea for remembrance. Seattle Symphony’s Gerard Schwarz penned In Memoriam, a beautifully meditative, elegiac piece for cello and string quartet, in honor of cellist David Tonkonogui (1958–2003). From acclaimed American art song composer Lori Laitman comes The Seed of Dream, a powerful song cycle based on five poems written by Abraham Sutzkever during his imprisonment in the Vilna Ghetto.

The lyrical intensity of these poems bears witness to the transcendent power of art in resistance to the forces of cruelty.