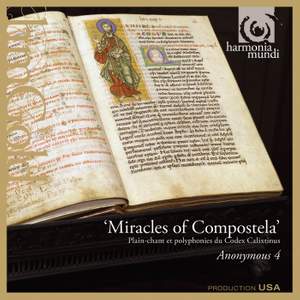 Medieval chant & polyphony for St James from the Codex Calixtinus

Since the late twelfth century, the Cathedral of Santiago in Compostela has possessed a manuscript entitled Jacobus (or Codex Calixtinus). How it found its way to Compostela is not known for certain, but it is undoubtedly a French product, probably compiled or written in Cluny around 1150.

Although they represent a mere ten percent of the music in Jacobus, the polyphonic works have received attention from scholars because they are among the earliest such pieces to have been written down. But the notation in Jacobus is ambiguous as to rhythm and metre, as well as to alignment of pitches between the voice parts in the polyphony.