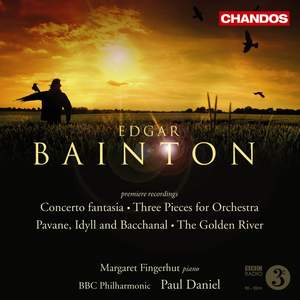 Delius with a splash of Eric Coates. Bainton is worth knowing, and is strongly espoused in these premiere recordings by Paul Daniel and the excellent BBC Philharmonic. — BBC Music Magazine, May 2008, 4 out of 5 stars More…

III. The King of the Golden River. Allegro, all burla

The earliest work recorded here, The Golden River, is taken from the Newcastle years and takes its inspiration from the short story by John Ruskin. The original version was completed in 1908 before being completely revised and a new third movement added in June 1912 – the version you hear on this

recording. Last performed in 1913; this is the first time it has been heard in over 90 years. In 1914 while en route to the Bayreuth Festival, Bainton was apprehended as a British civilian in wartime Germany and interned for the next four years in Ruhleben Camp near Berlin. He was placed in charge of music-making at the camp and became acquainted with a number of other musicians, including Ernest MacMillan and cellist Carl Fuchs. Despite many hardships this four-year exile proved to be a period of great creativity, resulting in Three Pieces for Orchestra and a piano concerto, his Concerto Fantasia, which he completed in 1920, and was awarded a Carnegie Prize. Bainton’s approach to Concerto Fantasia is original, (although possibly sparked on hearing Busoni’s Piano Concerto in 1909) the ‘Fantasia’ element being created by the opening cadenza which continually re-appears at various stages of the work and an integral part of the thematic material. At a performance given in Birmingham in 1921, with Bainton as soloist, the critic Alfred Sheldon wrote “… the event introduced to Birmingham the most considerable contribution to the repertory of music for piano in combination with orchestra we have had from a composer for many years.” Here the work is performed by Margaret Fingerhut, who has an extensive discography with Chandos. In a recent review she was described as “an accomplished and stylish advocate” (BBC Music Magazine). Completing the repertoire is Bainton’s only published orchestral work, the poignantly Pavane, Idyll and Bacchanal. All premiere recordings.

Delius with a splash of Eric Coates. Bainton is worth knowing, and is strongly espoused in these premiere recordings by Paul Daniel and the excellent BBC Philharmonic.

All four works were composed prior to Bainton's permanent move to Australia in 1934, by far the most ambitious being the Concerto fantasia for piano and orchestra which won Bainton his second Carnegie Award. It is cast in four movements, launched by a solo cadenza destined to reappear at salient points throughout the work's half-hour course. Margaret Fingerhut's limpid pianism proves tailor-made for such a gorgeously lyrical, tenderly poetic and subtly integrated offering, which bids farewell in the sunset glow of a somewhat Baxian epilogue.
Bainton himself was the soloist for the 1921 world premiere of the Concerto fantasia in Bournemouth, where it shared a programme with the extremely fetching Three Pieces for Orchestra (1916-20). These grew out of incidental music for two Shakespeare productions in Ruhleben Camp near Berlin, where Bainton was held during the First World War, and are followed here by another most attractive triptych, the Pavane,Idyll and Bacchanal that Bainton wrote in 1924 for amateur groups but which requires a high level of technical expertise.
Unheard for the best part of a century, the four-movement suite The Golden River (1908, but revised four years later) derives its inspiration from a short story by John Ruskin and packs plenty of touching and colourful invention into its 16-minute span.
The BBC Philharmonic under the sympathetic baton of Paul Daniel seem to enjoy the experience. Excellent sound.

The BBC Philharmonic under the sympathetic baton of Paul Daniel seem to enjoy the experience, and the engineering is as ripe as accommodating as we have come to expect from Chandos.