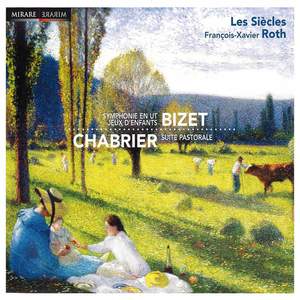 [CD OF THE WEEK 03/07/08] We all felt it was the clarity which stood out - both of the playing and the recording. Andrew [McGregor] described the Bizet symphony as having a 'Mendelssohnian lightness' — CD Review More…

The French conductor François-Xavier Roth was born in France in 1971 and studied at the Conservatoire National Supérieur de Musique. In October 2000 he won joint first prize at the Donatella Flick Conducting Competition in London, following which he was appointed for two seasons assistant conductor with the London Symphony Orchestra. From 2000 to 2002 he was also assistant conductor with the Caen Orchestra. In 2003 François-Xavier Roth created the chamber orchestra Les Siècles (The Centuries), combining period and modern instruments, an orchestra which covers a vast repertoire from Baroque to contemporary music.

[CD OF THE WEEK 03/07/08] We all felt it was the clarity which stood out - both of the playing and the recording. Andrew [McGregor] described the Bizet symphony as having a 'Mendelssohnian lightness'

a jaw-dropping new recording of Chabrier's Suite Pastorale made by French conductor Francois-Xavier Roth and Les Siecles…This is a fresh, vibrant recording of French music inspired by the countryside - and it comes in a
beautiful package, full of woodland scenes and comprehensive information about the works on the disc. The lively Suite Pastorale by Emmanuel Chabrier is a real discovery: bright, upbeat tunes with a really
rustic sound. The rest of the disc is devoted to music by Georges Bizet. There's a thrilling performance of his Symphony In C, and an equally compelling version of Jeux d'Enfants (Child's Play).

Simon Bates CD of the Week