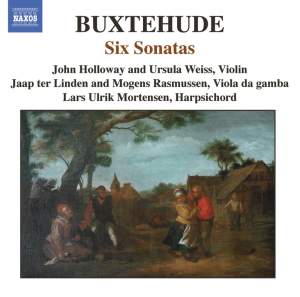 Buxtehude: Sonata in A minor, BuxWV272

Having been born half a century after Heinrich Schutz, the ‘father of German musicians’ and a little less than half a century before J. S. Bach, Dietrich Buxtehude was a living link between the founder of Protestant Baroque music and its greatest master. This set of six sonatas without opus numbers incorporates all the principal elements in the sonata art of the Lubeck master; the serious yet daringly expressive harmony of his majestic slow movements, masterful fugal technique, melodious and graceful dance movements, and technical virtuosity in the many solo movements.