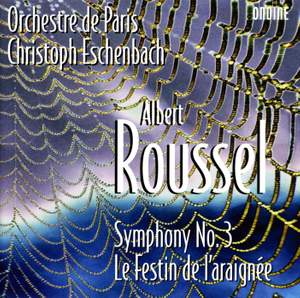 A garden. - Sitting in her web, a spider surveys the surroundings

Entry of the ants. - They find a rose petal. - With great effort they lift

Left alone, the spider daydreams and watches the landscape. - She checks the strength of her thread.

Entry of the dung beetles.

The ants return. - They prepare to carry another petal, when a butterfly appears.

The spider rejoices. - She frees the butterfly from her web and takes it to her larder.

The spider dances. - Suddenly fruits come crashing down from a tree.

Fruit worms enter and prepare to revel in the fallen fruits.

Warlike entry of two praying mantises who lift their frightening blades and forbid anyone to approach.

The ants dance in a circle. - The two mantises blame each other for the trick which was played upon them.

The mantises challenge each other to a duel. - They fight. - The spider dances in order to make the mantises more excited.

The mayfly stops, exhausted. - The ants, the spider and finally the dung beetles pay their respects.

The mayfly and the fruit worms dance.

The spider prepares to begin her feast, but one of the mantises, freed by the dung beetles from the web, slips behind the spider and kills her.

Death throes of the spider

Funeral of the mayfly. - The funeral cortege sets off and vanishes into the distance.

Night falls on the deserted garden.

This Albert Roussel disc is the final in a successful cycle of three Ondine releases featuring the four symphonies and two ballets by the French composer.

The Third Symphony, which was given its world première in Boston in 1930, is a true masterpiece and remains the most popular of Roussel's symphonic works. Le Festin de l'araignée (The Spider's Feast) was completed in 1913 and is the second of Roussel's celebrated ballets, the other being Bacchus et Ariane, which was featured on a previous release.While there are many accounts of the symphonic fragments, this disc contains the complete ballet music.The music is energetic, melodic, original, and programmatic, helped by the choreographical annotations from the original score which are contained in the track listing of this CD.The booklet contains expert liner notes from the Centre International Albert-Roussel in France, as well as rare photographs.

Both previous Roussel releases have contributed to a revival of the French composer's music and have earned high praise in the international press.

Eschenbach's understanding of Roussell is manifestly profound and his way with the music quietly compelling and persuasive. Very highly recommended.

[Eschenbach] subjects [the Third Symphony] to radical scrutiny, though his take on the piece won't be to all tastes. This is a dark interpretation of a work usually considered optimistic and urbane. What we think of as a joyous explosion of rhythm often sounds savage and perplexing. There's turmoil beneath the elegant veneer of the melodic lines. He's right, of course, to argue that we shouldn't dismiss the Third as lightweight. At the same time, it's all a bit too self-consciously done, and Eschenbach seems altogether happier with the ambiguities of Le Festin de l'Araignée...Eschenbach's understanding of the mixture of surface charm and underlying malaise is marvellously acute, and the playing is often devastating in its brilliance.