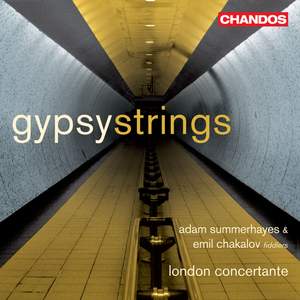 … a mix of Django Reinhardt and Jascha Heifetz, gypsy music and jazz. It's heady stuff, with some thrilling virtuoso playing. — Gramophone Magazine, April 2008

trad.: Put Out Your Cigarettes and Dance

Gypsy Strings was conceived to display the impressive talents of London Concertante’s leader Adam Summerhayes and Bulgarian fiddle-player Emil Chakalov. In stunning new arrangements of traditional gypsy tunes seen from a totally different angle as well as a selection of original compositions, the two soloists demonstrate their technical agility and improvisational skills as they duel for the crown of ‘violin supremo’ in a flamboyant programme of virtuoso ‘jousting’, all with the backing of London Concertante’s twelve-player string section.

Artistic Director Chris Grist writes on the project, “As we performed together I was struck by two things: their amazing playing and their dedication to the highest technical standards of violin-ism. It also became apparent that

they shared not only a profound love for the Eastern European fiddle music they have both known since childhood, but also an instinctive ability to improvise together.”

The players of London Concertante give a remarkable freshness and vibrancy to the fiddle heritage with haunting new melodies, exciting rhythms and some refreshingly new perspectives. The ensemble enjoys an ever growing reputation for exciting and memorable performances, thanks to exceptional players and inspired programming.

… a mix of Django Reinhardt and Jascha Heifetz, gypsy music and jazz. It's heady stuff, with some thrilling virtuoso playing.