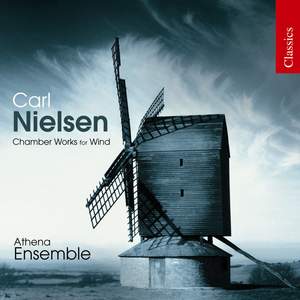 Bornene leger (The Children are Playing)

Taagen letter (The Fog is Lifting)

Nielsen composed most of his wind chamber music towards the latter part of his career, when his interests moved from strings to wind instruments. The disc includes the most familiar and widely recorded specimen of Nielsen’s chamber writing, the 1922 Wind Quintet, coupled with lesser known works such as Serenata in Vano, Two Fantasies Op.2 and Canto Serioso. “Both major and minor works are wonderfully played… One can urge immediate acquisition of this disc,” wrote Fanfare. Although, now longer performing publicly, the Athena Ensemble had an excellent career and reputation, “The music is expertly performed with charm, sensitivity and imagination by the Athena Ensemble” said Classic CD (on the Elgar Wind Quintet recording, CHAN 241-33) and this disc is sure to remind listeners of their back catalogue with Chandos.