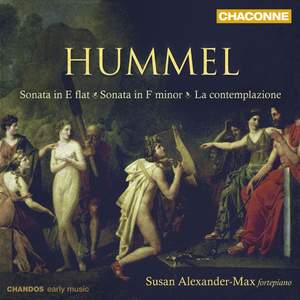 While tone is fragile compared to a modern grand, the colours are striking. …Max chooses more moderate tempos than many on disc… Her expansive approach allows the pulse of the F minor Sonata's... — BBC Music Magazine, January 2010, 4 out of 5 stars More…

‘Alexander-Max has an appreciation for Hummel’s writing that comes through clearly in her confident and skilful playing, and, although she easily could, she is careful not to grab the spotlight all for herself.’ All Music Guide.

Finalist in the International Bach Competition, Susan Alexander-Max is a graduate of the Juilliard School of Music, and a native of New York City. Her previous recording of chamber music by Hummel was awarded top ratings from BBC Music Magazine and was received throughout the world to outstanding critical acclaim. Highlights of her performances include some of the world’s most prestigious venues and festivals, including the Cheltenham International Festival of Music; Queen’s Festival of Early Music, Belfast; the English Haydn Festival; the Haydn Festival, Eisenstadt, Austria; the Vleeshuis Museum, Antwerp; and the Prague Spring International Festival of Music.

Susan Alexander-Max performs these rarely recorded sonatas on a Joseph Brodmann fortepiano built in Vienna in 1814. It is the first time they have been recorded on a period instrument.

During his stay in Vienna between 1811 and 1816, Johann Nepomuk Hummel very probably knew and played the Brodmann pianofortes, identical to the one in the collection at the Museé de la musique where the performances were recorded.

While tone is fragile compared to a modern grand, the colours are striking. …Max chooses more moderate tempos than many on disc… Her expansive approach allows the pulse of the F minor Sonata's opening, for example, to flex expressively within Hummel's own sudden tempo changes. Best is La contemplazione, a 'little fantasia'. Its serene opening includes charming dialogue between the upper and bass, while the middle section's shifting tonalities support alluring lyricism.

…the skill of Hummel in his exploitation of the keyboard is consistently impressive, bringing together Mozartian manners and a vein of Romanticism. Susan Alexander-Max, playing on a reproduction fortepiano of the period, is a most persuasive interpreter. It would be easy to make this music sound boring and conventional but she brings out the underlying liveliness, reflecting the impact that this music in the composer's hands made on audiences.