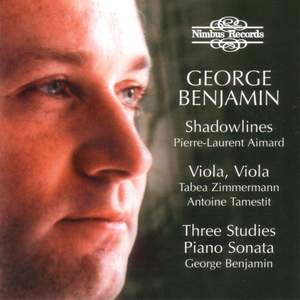 I. Fantasy on Iambic Rhythm

This disc includes the World Premiere recordings of Shadowlines, written for its performer here, Pierre-Laurent Aimard, in 2001, and the Three Studies for Piano, written during the early 1980s and played here by the composer. Coupled with these are Viola, Viola, written in 1997 and now one of George's most frequently performed works, and the classic recording of the Piano Sonata, written in 1979 and recorded shortly after.