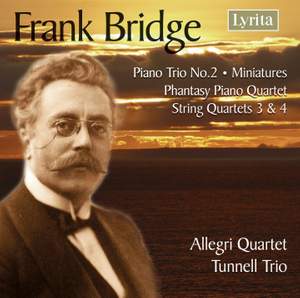 Piano Trio No. 2: I. Allegretto

"Frank Bridge is known almost entirely by his early works such as the Piano Quartet Phantasy. To those who know only this period of his work, the later pieces must seem like those of another composer. The earlier works are tonal, and harmonically direct, the melodies clear and strong, the rhythm if not square, then rather regular. The later works have no clear keys, the melodies have a curious conversation-like character the rhythms are usually irregular, and definite rhythmic patters are rare. But to those familiar with all his works the connection between the two periods is clear — the seed of the later work is in the earlier — stemming from a desire to say more personal and subtler things. They can be difficult at first to follow, apart of course from the invariable fascination of the sound, the conversational melodies can be difficult to recognise, but the drama and tensions (are) easy to feel." Benjamin Britten, 1955