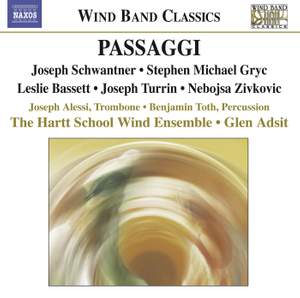 Zivkovic, N J: Tales from the Center of the Earth, Op. 33

Stephen Gryc and Nebojsa Zivkovic composed their concertos – Passaggi and Tales from the Center of the Earth, respectively — for the instruments they play themselves.

The artistic integrity and natural virtuosity of these major works is further magnified by the astonishing musicianship of the soloists, trombonist Joseph Alessi and percussionist Benjamin Toth, each a much acclaimed musician.

Joseph Schwantner’s highly rhythmic Recoil contrasts with the simple and eloquently lyrical beauty of the lullabies by Leslie Bassett and Joseph Turrin, which evoke an adult’s longing for childhood innocence.