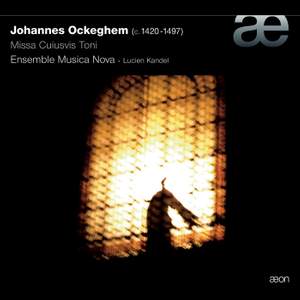 This is a recording that was waiting to happen: to do full justice to Ockeghem's famous Mass designed for performance 'on whatever tone you choose', you really need to hear several complete versions... — Gramophone Classical Music Guide, 2010 More…

With the Missa cuiusvis toni, Ockeghem achieves a veritable tour de force: a work having the advantage of being able to be executed in all church modes. In an era when composers vied with each other in virtuosity, this mass 'in whatever tone' became an unsurpassable model. Musica Nova recreates the four versions here for the first time on disc.

This is a recording that was waiting to happen: to do full justice to Ockeghem's famous Mass designed for performance 'on whatever tone you choose', you really need to hear several complete versions side by side, and this is the first to present it that way. What's more, Ensemble Musica Nova's performances are technically superior to any that have been committed to disc so far.
The precise number of possible versions intended by Ockeghem has long been a matter of conjecture, but recently scholars have come back round to the idea that there may have been no more than three (starting on re, mi, and fa).
Here, there are four, comprising the Dorian, Phrygian, Lydian and Mixolydian modes. For what it's worth, the last two are so close as to be virtually indistinguishable (which supports the view that the Mixolydian version is superfluous).
Inevitably, given the uncertainties attending modal usage in medieval polyphony, one can take issue with certain decisions affecting the 'colour' of each mode. The decision, for instance, to interpret many Bs as flat in the Phrygian is slightly confusing.
In each version, the modal final (roughly equivalent to the home key in tonal music) is sung on the same absolute pitch. As well as being sound from a historical standpoint, this eliminates at a stroke any problems of range and tessitura: the singers deliver each version with the same ease. In addition, each version is sung at precisely the same tempo. Though this decision is less self-evident, it has at least the virtue of consistency.
Ensemble Musica Nova are a mixed choir singing two-to-a-part in a sympathetic acoustic that allows for contrapuntal clarity and a sound image at once warm and bright. Just occasionally one detects signs of tiredness, at the beginning of the Mixolydian Sanctus for instance, where there is also an inexplicable 'gain'. But these really are quibbles in the face of such an enterprising project: the music is glorious?

Ensemble Musica Nova are a mixed choir singing two-to-a-part in a sympathetic acoustic that allows for contrapuntal clarity and a sound image at once warm and bright…the music is glorious...[the Ensemble] presents various complete versions of the Ockeghem Mass alongside each other. So if you can’t get enough of this Mass, here is your ideal answer. As variations on a theme, as it were, it’s a fascinating and rewarding exercise. The performances are excellent; one for the collection.