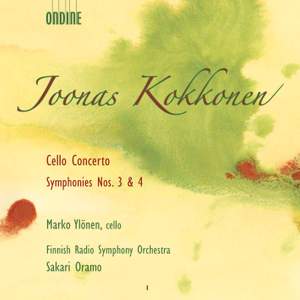 Kokkonen: Concerto for Cello and Orchestra

This disc features major works of Finnish composer Joonas Kokkonen - the dominant figure in post-war Finnish music since the death of Jean Sibelius 50 years ago.The featured works were written between 1967 and 1971 during the composer's late neo-Romantic period of free tonality. Kokkonen linked himself to the symphonic tradition of Brahms and Sibelius.The Cello Concerto, with its profound central Adagio movement, is a gem in Finnish concerto literature and probably the most-performed cello concerto by any Finnish composer. It features soloist Marko Ylönen, who specialises in contemporary repertoire. Previous recordings with chief conductor Sakari Oramo and the Finnish Radio Symphony Orchestra include the Lindberg CD which won both a Classic FM Gramophone Award and a BBC Music Magazine Award in 2006 (ODE10382).