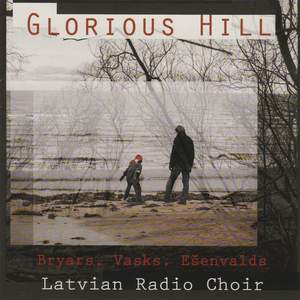 Gavin Bryars's music and the special qualities of the Latvian Radio Choir fit one another like hand and glove. And the glorious acoustic of Riga Cathedral lends its aura to his CadmanRequiem... — Gramophone Classical Music Guide, 2010 More…

In recent years Gavin Bryars has concentrated to a great extent on writing for the human voice and a great deal of this is choral music. He has a close relationship with ensembles from the Baltic, especially the Latvian Radio Choir, now without doubt one of the world's greatest choirs. His first collaboration with them on GB Records was the superb On 'Photography', which was an Editor's Choice in Gramophone and extensively played on BBC Radio 3. This very fine choir is at home in all forms of contemporary music, but also in music from the baroque as well as early music. Many of Gavin Bryars' works on this recording take forms from early music, and some pieces originate in collaborations with early music ensembles - such as the Hilliard Ensemble and Trio Mediaeval.

Here we have the stunning female voices of the Latvian Radio Choir in 9 and 11 part laude; the whole choir a capella in Glorious Hill and, in Cadman Requiem, accompanied by Riga Cathedral's magnificent organ in the cathedral's stunning acoustic. As on the first recording with the Latvian Radio Choir, Gavin Bryars has included works by Latvian composers close to his heart. Eriks Esenvalds is a young composer whose work recorded here was awarded first place at the 2006 International Rostrum for Composers. Peteris Vasks is perhaps the best known of all living Latvian composers. The work of both composers has a profound concern for the spiritual, which has led it to be linked with the music of composers such as Arvo Prt or Giya Kancheli.

Gavin Bryars's music and the special qualities of the Latvian Radio Choir fit one another like hand and glove. And the glorious acoustic of Riga Cathedral lends its aura to his CadmanRequiem and two 13th-century chants (the latter chosen because they relate to, and effectively offset, the three Bryars Laude).
All this music has a restrained purity that never admits suspicions of opportunism, in the way some work in this spiritual minimalist field does.
There is more floridity to Eriks Ešenvalds's Legend of the Walled-up Woman, but this too feels like part of the natural voice of the music and its subject matter. Only in Peteris Vasks's Zilis zina does the impression surface of special effects for special effects' sake. And even that can be taken as an effective vehicle for this remarkable choir to display the full range of its talents.
Bryars's 12-minute Glorious Hill, which lends its title to this generously filled disc, sets a marvellous Italian Renaissance text that imagines God addressing Adam as He confers free will on mankind. Even more powerful in its inspiration and consistent in its focus is the CadmanRequiem, composed in memory of a friend killed in the 1988 Lockerbie disaster. In this new version with organ rather than strings or viols, the music is utterly gripping, and affinities with the Fauré Requiem stand out in ways not previously registered. Overall then, an eminently collectable disc, beautifully sung and recorded from first note to last.

This is not only a musically distinguished, but also a cleverly plotted album. Contemporary and early works jostle and juxtapose. So one can marvel at the transcendent purity of Gavin Bryars’s depiction of God giving free will to mankind, then hear the shattering aftermath of that decision in his remembrance of the Lockerbie attack, Cadman Requiem...an eminently collectable disc, beautifully sung and recorded from first note to last.