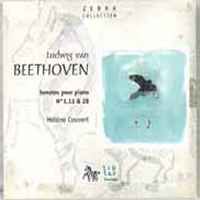 ‘The first sonata that I have chosen represents for me a sort of point of intersection with Haydn, just as it inaugurates Beethoven’s first stylistic period. The other two embody the aesthetic positions he defended later on, in stark contrast with his early period.Of course, at first contact one senses profound differences

between these three sonatas. But what seems to me to bring them together is the fact that their style is close to improvisation: for example, op.2 no.1 contains a ‘quasi-improvised’ ornamental movement that follows on directly from Sturm und Drang; and the other two sonatas are written like fantasias, with an almost introverted beginning to op.27 no.1 and a Schumannesque depth to op. 101. It was precisely this freedom that appealed to me, with its interruptions, its mystery,the absence of predictable form, and the way these works teem with little

elements (as in Schumann and Haydn).But Beethoven was always careful to fit this freedom into a solid framework. I like that; I sense in that tension a ferment of vital energy. For me, Beethoven is a sort of essence of life. His music constantly moves forward, in a spirit of tremendous determination. It always shows signs of

struggle. I feel deeply in tune with this search for energy. His music reflects my character, which is direct, optimistic and resolute....I see it as a model of rigour, which doesn’t leave any room for complacency or facility. I also admire the balance it strikes between Classical mastery of form and the emergence of Romantic pathos. In fact, Beethoven represents for me a form of human and musical authenticity.’ Hélène Couvert (interviewed by Emmanuel Hondré)