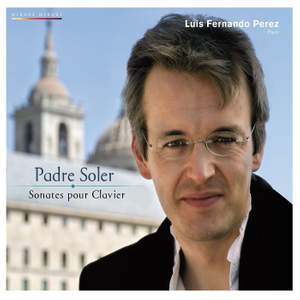 Born in Madrid in 1977, Luis Fernando Pérez studied with Dimitri Bashkirov, Pierre-Laurent Aimard, Alicia de Larrocha, and has received masterclasses from such maestri as Leon Fleisher,Andras Schiff and Menahem Pressler. His latest record [after three on the Verso label] is dedicated to the sonatas of the baroque Spanish composer Antonio Soler, all of which have been revised from original manuscripts and which contains a never before recorded nor published sonata. "Never would I have imagined that those constant week-end flying visits my parents and I used to make to San Lorenzo de El Escorial, a delightful village in the mountains above Madrid where Philip II built the imposing Monastery of San Lorenzo (something of a fetish for me), were going to unleash my love for the music of Soler, now reflected in this CD dedicated to his magnificent sonatas. San Lorenzo was the symbol of a great, powerful, rich and mystic Spain.This genial friar lived within the walls of its monastery for many years under the protection of Carlos III, the "Enlightened King" where he was tutor to the King's son, the Infante Don Gabriel. And it is at San Lorenzo where Soler lies buried in his modest tomb. Deeply religious, humane, full of life, Soler blended tradition with innovation, the past with the future, Spanish folklore guised in an altogether more international language. There have been almost two years' worth of research, microfilms, manuscripts and the rest. A thousand thanks to my teacher, Alicia de Larrocha, herself a great exponent of Soler's work, to Enrique Igoa for his kindness and wisdom, for the breakfasts at his house during which we would exchange information, to José Carlos Tata, Director of the Royal Library of the Madrid Conservatory, for so generously opening up the library's archives to me, and to N. R. Robinson and Diane Hudson of the Fitzwilliam Museum and the Cambridge University Library for their impeccable care and attention." Luis Fernando Pérez

"It is perhaps early in the 21st Century for predictions, but it is already clear to me that Luis Fernando Perez will take his place as one of the leading pianists of his generation. While technically brilliant, musically sophisticated, and intellectually curious, Luis Fernando has much more to offer us. Like the greats of the past, he possesses that rare ability to direct his musical message straight to the hearts and minds of his listeners. This gift, above all, sets him apart from his fellow musicians; it commands us to listen." Tom Deacon Exec. Prod., "Great pianists of the 20th Century"