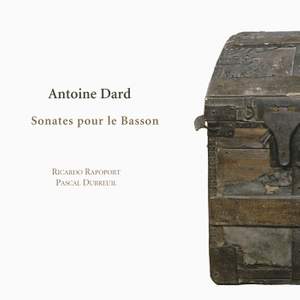 Dard: Sonate No. 1 en Do Majeur

Dard: Sonate No. 3 en Do Mineur

Although no ‘forgotten genius’ of music history, Mr Dard, as he signed all his scores, can certainly be considered a composer of special interest. The following advertisement appeared in the Parisian press in January 1759: “6 sonatas for bassoon, composed by Mr Dard, very useful for those who would play this instrument well.” Despite their marked French character the sonatas also display a definite Italian influence. Once again, a beautifully performed and presented CD from Ramee.