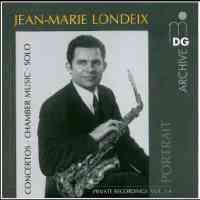 In the whole of the twentieth century no other instrumentalist exercised such an enduring influence in the international saxophone world as Jean-Marie Londeix. In celebration of the 85th birthday of this French virtuoso and living legend, the Dabringhaus & Grimm Archive series is rereleasing the four CD set replete with historic recordings from 1957 to 1995. Available at a special price, this set program includes recordings by the young Jean-Marie Londeix at the age of twenty-five as well as productions made when he was sixtythree. The good two dozen extraordinary compositions all are interpreted by him with great sensitivity and succinctness. The recordings on this CD are from the artist's private archive; many of them had never been released before, and some of the originals had long disappeared from the market. Now these interpretations by this exceptional musician celebrate their long overdue acoustic rebirth.