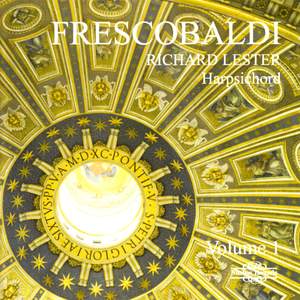 Performance of Frescobaldi demands a free, improvisatory style of performance, of which Richard Lester is obviously a master. He plays a perfectly chosen harpsichord with a particularly attractive,... — Penguin Guide, 2011 edition More…

Cardinal Francesco Barberini, Frescobaldi’s most important patron owned many instruments housed in the Pallazzo della Cancelleria, his residence as vicechancellor of the Church of San Lorenzo in Damso. Giovanni Battista Boni da Cortona was a harpsichord and organ builder, tuner and repairer who worked for the Barberini family and he features prominently in their archival records. The Cardinal’s inventories amongst other instruments, also mention a chamber organ, a spinet and two harpsichords - one with three registers and another with a single register built by Giovanni Boni, who specialised in making instruments with split keys. The instrument played on this CD is one of three surviving single - brass strung harpsichords made by Boni around 1619. It is a fascinating probability that during his employment in the Cardinal’s household in 1634, Frescobaldi performed on this harpsichord.

Richard Lester was described both by The Times and the Daily Telegraph as ‘one of our leading players’ and more recently acclaimed as ‘one of the greatest early music keyboard players of this or any other time.’ In 1981, Sir William Glock, former BBC controller of music invited him to perform a solo harpsichord recital at the Bath International Festival. Countless engagements at major international music festivals followed including the Bruges festival, Bath Bach festival and concerts at the Wigmore Hall, Royal Albert Hall, and in 2007 a sell out solo recital at London's South Bank Centre.

Performance of Frescobaldi demands a free, improvisatory style of performance, of which Richard Lester is obviously a master. He plays a perfectly chosen harpsichord with a particularly attractive, warm sonority, not in the least 'clattery'