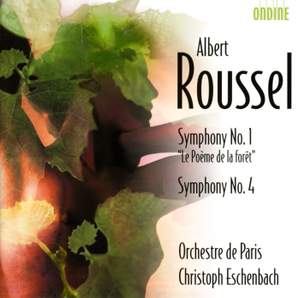 …these are very impressive performances… The languorous slow movement of the first symphony, 'Soir d'été', is sublime, while Eschenbach finds the latent menace underpinning the opening 'Forêt... — BBC Music Magazine, April 2007, 5 out of 5 stars More…

…these are very impressive performances… The languorous slow movement of the first symphony, 'Soir d'été', is sublime, while Eschenbach finds the latent menace underpinning the opening 'Forêt d'hiver'. These are spacious performances allowing the music plenty of space to breath...His magnificent account of the 1st Symphony is unsurpassed.

For a work composed originally as independent items, Roussel's impressionist First Symphony (1904-06) works surprisingly well. True, its structure is unorthodox, each of the four movements – which form a seasonal cycle from winter to autumn – larger than its predecessor, but it all flows together remarkably well, adding up to rather more than a picturesque set of tonepoems or suite. Small wonder it so impressed early audiences.
Roussel refined his symphonic style considerably over time, so comparing the First with the Fourth of three decades later shows just how far he had travelled. The Fourth is an abstract masterpiece, typically mixing up compositional rigour, lyrical intensity and rhythmic élan. If the Fourth does not quite match the Apollonian drive of No 3, this is because it is a very different type of work to its celebrated forebear.
As with his recording of No 2, Eschenbach's accounts are highly evocative and beautifully phrased. Tempi are again broad, working well in Le poème de la forêt where he relishes the poetry of this quietly sumptuous score. In the Fourth, however, after finely shaped readings of the first two movements, the third and fourth are dispatched with a lightness bordering on the throwaway. What makes this newcomer recommendable is the superb playing and Ondine's first-rate sound.