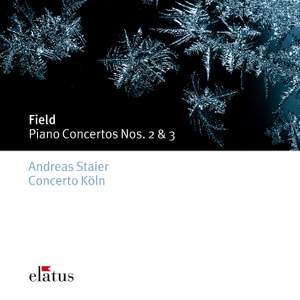 For those who love the sound and capabilities of the modern piano, the fortepiano's thinner tone, distinctive timbre and more intimate dynamic scope (or, put another way, the lack of power) take... — Gramophone Classical Music Guide, 2010 More…

I Moderato e molto espressivo [Nocturne No.2 in C minor]

For those who love the sound and capabilities of the modern piano, the fortepiano's thinner tone, distinctive timbre and more intimate dynamic scope (or, put another way, the lack of power) take some adjusting to. But once one is attuned to its tonal and colouristic possibilities, the daring nature of the piano writing emerges with striking force. Take the soloist's first entry in the Second Concerto, where the virtuosic power and originality delivers its full intended frisson and physicality when heard on an instrument being pushed to its limit. Andreas Staier is a brilliant pianist who allies dazzling technical élan to his acute musical insight and imagination. In the outer movements, his fingerwork is as precise and crystalline as his musical intelligence, with passagework assuming a quasi-melodic purpose, elevated to the level of what Gerald Abraham called 'significant line'.
The slow movement of the A flat Concerto, a brief contrasting molto espressivo song without words, is played with unaffected simplicity and clarity of line, while in the E flat major Concerto, Staier follows Field's own practice of interpolating one of his nocturnes as a slow movement by playing the well-known work in C minor. Staier is a most poetic and inspiring advocate, yet the success of these performances is as much due to the extraordinary clarity and impact of the Concerto Köln's orchestral playing.
There's such an infectious generosity of spirit, such vivid character and crispness, with beautifully poised wind playing and a real bite from the brass and timpani. Try the opening of the finale of the Second Concerto, where, after the lilting melody is presented by the soloist, the full orchestra respond with invigorating gusto and rusticity, never losing their tonal blend or refinement. The recorded sound, too, is wonderfully clear and detailed.