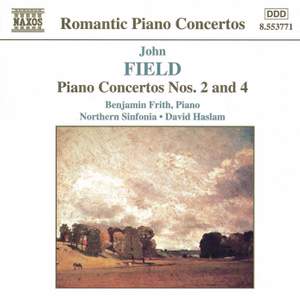 "The third and latest installment of Naxos's set of the piano concertos by Irish composer John Field is the best one yet, and the performance of Benjamin Frith is actually one to rival that of Michael O'Rourke for Chandos' series of Field's music. In the virtuoso showcases of the Fifth (L'Incendie par l'Orage) and Sixth concertos, Frith shows a nice sense of both showmanship and poetic skill. The nickname of the fifth, Fire from the Storm, aptly describes the vast opening movement, which both Frith and conductor David Halsam - leading the Northern Sinfonia - build up with a real flair for the work's passion. But it is the Sixth Concerto which is the CD's finest accomplishment. A better work, the later concerto benefits from a better balance, and a beautifully crafted cadenza by Frith."