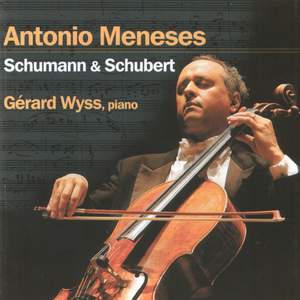 …this recording boasts some of the most beautiful cello playing I have heard in years. The highlight for me is their brilliant account of Märchenbilder, Schumann's 'fairy tale pictures' for... — BBC Music Magazine, April 2007, 5 out of 5 stars More…

Brazilian cellist Antonio Meneses, Beaux Arts Trio member and a frequent collaborator of the world’s greatest conductors and orchestras, made an indelible impression with his recording of J S Bach’s Six Cello Suites (AV 0052). A consistently strong seller, it garnered a Benchmark accolade from BBC Music Magazine. In this release of works by Schubert and Schumann, Antonio revels in romantic ardour and the composer’s lyrical qualities. Together with his accompanist, Gérard Wyss, Antonio’s consummate artistry results in performances that are so elegant it’s hard to believe that all but one of the works, Stücke im Volkston, were originally written for instruments other than the cello.

…this recording boasts some of the most beautiful cello playing I have heard in years. The highlight for me is their brilliant account of Märchenbilder, Schumann's 'fairy tale pictures' for viola: this is by far the best recorded account of that work on cello... Spellbinding, too, is this reading of Schubert's Arpeggione Sonata: the slow movement has gleaming surface, the first passage work a violin-like finesse.

Meneses negotiates the Arpeggione Sonata's dauntingly high tessitura with no sense of strain, and the other Schumann sets, designed respectively for horn, clarinet and viola, sound like idiomatic cello music. He's a true virtuoso, as the fast passages in the Arpeggione and the third of the Märchenbilder amply demonstrate, but one never feels that he's presenting himself. The impression is rather that he's inviting us into Schumann's or Schubert's inner world, urbanely drawing attention, by means of subtle emphasis or change of colour, to all the music's incidental beauties.
Gérard Wyss, as an experienced Lieder accompanist, has a similar eye for illustrative detail; his touch is unusually sensitive, with chords always beautifully balanced, and his left hand gives exceptional vitality to the bass-lines. The finale's minor-key episode in Hungarian style bubbles with vitality. Similarly, all the Schumann pieces are performed in an outgoing, friendly way; especially enjoyable is the first of the Stücke imVolkston, progressing from a light, playful start to sweeping romantic gestures, and the last of the Märchenbilder, sweet and tender, with an almost Mahlerian sense of regret and loss.