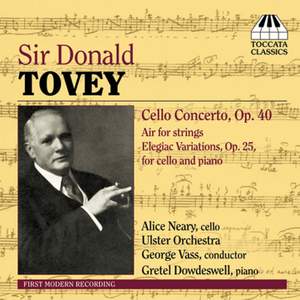 Donald Tovey (1875-1940) has long been known as one of the finest writers on music in English – but he saw himself primarily as a composer. His Cello Concerto – written for his friend Pablo Casals in 1932-33 – may be the longest in history; indeed, as he worked on the score he wrote to a friend that the first movement would be a ‘record-breaker’ and ‘much the juiciest’ music he had yet produced. The work sits mid-way between Brahms and Elgar, but has a lyrical and dignified voice that is uniquely Tovey’s. The contrasting tone of the dark, heroic Elegiac Variations was inspired by the death of Robert Hausmann, cellist of the Joachim Quartet and a cherished chamber-music partner of Tovey’s. And the charming Air for strings reveals his delight in a well-turned Classical theme.

With a playing time of nearly 55 minutes, Sir Donald Tovey's Cello Concerto (composed in 1932-33 for Pablo Casals) is almost certainly the longest ever written. Casals gave the world premiere in Edinburgh's Usher Hall in November 1934, with the composer conducting. Two London performances by the dedicatee followed in 1935 and 1937. Plans for a modern recording fell through a decade or so ago; now Toccata Classics has at last delivered the goods.
Readers who know and love their Brahms and Elgar will recognise many a stylistic and temperamental bond in this painstakingly plotted music.
However, the protracted opening Allegro moderato constitutes something of a stumbling block.
Both middle movements do little to dispel the obstinately somnolent mood – although the finale's jocular yet cleverly manipulated antics nearly save the day. If you've enjoyed grappling with Tovey's large-scale Symphony in D, it's worth persevering. Alice Neary performs valiantly, with sympathetic (if at times rather under-energised) support from George Vass and the Ulster Orchestra. Throw in the engaging fill-ups, decent sound and assiduously detailed bookletnotes, and it adds up to yet another intriguing release from this young label.