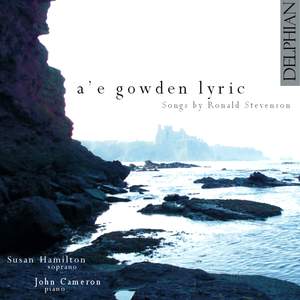 No. 13, From a Railway Carriage

No. 3, The Bobbin Winder

No. 2, The Bonnie Broukit Bairn

No. 2, The Bonnie Broukit Bairn

Susan Hamilton first performed the music of Ronald Stevenson as a treble in 1985, when she gave the first broadcast performance of A Child’s Garden of Verses on BBC Radio 3.

Her unique, clarion voice inspired Stevenson to dedicate his May Songs for soprano and orchestra to her three years later. Since that early collaboration, she has brought Stevenson’s songs to audiences throughout Britain and abroad. Stevenson’s keen ear for setting Scots poetry in an original idiom is rooted in his panglobal approach to musical philosophy. He is as comfortable setting the words of Robert Louis Stevenson as he is the poetry of Tagore.

The present recording features the soprano version of A Child’s Garden of Verses alongside settings of Scots poems by Hugh MacDiarmid and William Soutar and a short translated verse by the Gaelic poet Sorley MacLean.