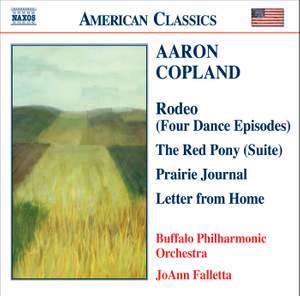 Some discs are recommendable just because they present appealing, well-played programs in good sound at a great price. In such cases, comparisons are not the issue; we can enjoy them as a concert... — American Record Guide More…

Copland: Music for Radio: Saga of the Prairie, "Prairie Journal"

I. Morning on the Ranch

IV. Walk to the Bunkhouse

Some discs are recommendable just because they present appealing, well-played programs in good sound at a great price. In such cases, comparisons are not the issue; we can enjoy them as a concert in our living rooms. JoAnn Falletta's new Copland disc is one of those

…Rodeo, is played not just with precision but also with great freshness and spirit, and responsiveness to the moments of humour and introspection.

This attractive anthology represents Copland the Populist, to quote the title of Tilson Thomas's stunning RCA disc of all three ballets with the San Francisco Symphony. There are two suites, one from film and one from ballet, plus a couple of less familiar short pieces written for radio.
The least recorded of these is Prairie Journal, which had an odd genesis. It was commissioned by CBS Radio in 1936, premiered simply as Music for Radio, and their massive audience was invited to send in suggestions for a better title. A thousand people responded and Copland chose Saga of the Prairie – even at this stage listeners thought his music evoked the Western scene.
Copland changed the title much later. In both this piece and Letter from Home – as he admitted, a slightly sentimental picture of our boys at the front receiving mail in 1944 – he was taking the mass medium of radio seriously.
He did the same with films, as The Red Pony shows. The suite was performed in 1948 before the Steinbeck film was released. It's full of diatonic tunes you think you've known all your life, pure triads and Copland's characteristic snappy scoring.
These are lively performances in the Copland tradition, although Letter from Home seems fast and at times the orchestra lacks finesse.

…lively performances in the Copland tradition…