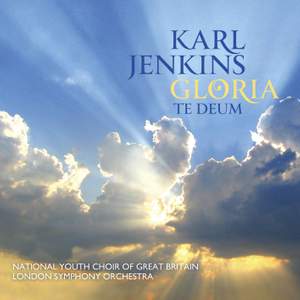 Accompanied by an LSO on top form, the National Youth Choir of Great Britain produce the deep, strong wall of sound needed in the punchier movements, and luscious creamy richness in the second... — Charlotte Gardner, bbc.co.uk, 24th June 2010 More…

I. The Proclamation: Gloria in excelsis Deo

Reading from the Hindu Bhagavad-gītā

Reading from the Buddhist Diamond Sutra

Reading from the Qur'an: 'Al Fatiha'

EMI Classics presents Gloria, the brand new choral work from Karl Jenkins, the most prolific and performed composer in the world today. Breaking new ground, it will be premiered at the Royal Albert Hall.

"As a composer, he recognises no boundaries - musical, commercial, geographical or cultural. His is a way of thinking and composing that is perfectly in tune with the spirit of the times." Classic FM Magazine

“I don’t see any point in being a composer if one doesn’t have one’s work performed or heard or sung.” (Karl Jenkins).

Karl Jenkins’s latest composition, Gloria, will be premiered at the Royal Albert Hall on 11 July 2010 by The Really Big Chorus, with the English Festival Orchestra and student vocal soloists conducted by Brian Kay. Abbey Road Live will record the concert, which also features Fauré’s Requiem, and the resulting CD will be for sale on the night to the performers and audience. This will be the first time a world premiere has been recorded live and made available for sale immediately following the performance. The following day, 12 July, EMI Classics will release a studio recording of Gloria, paired with Jenkins’s Te Deum featuring the composer conducting the National Youth Chorus of Great Britain and the London Symphony Orchestra with soloist Hayley Westenra.

Hayley says: "I first came across Karl's work when I was still living in New Zealand. This led me to recording "Benedictus" for my first international album "Pure" seven years ago. For many people it soon became the stand out track and I performed it live for my PBS Special U.S. TV show. Karl's work is so rewarding to sing as he writes such dynamic and beautiful melodies for the voice, and I jumped at the chance to not only perform his music again, but to actually record his Gloria with Karl himself directing."

Karl Jenkins is Britain's biggest selling classical composer (especially if the Adiemus sales are taken into account). He has made some of the best loved and most successful music of the last decade, delighting audiences around the globe and selling over 3 million albums in 50 countries. The Armed Man has firmly established itself as one of the most successful choral works of our time, with over 800 performances in more than 20 countries, and close to 70,000 vocal scores sold to date.

Fusing the ancient, the classical and the contemporary his work transcends boundaries and reaches out to everyone and his ability for composing music for television, cinema and commercials has earned him even wider recognition, - Delta Airlines, De Beers, Speedo, Levis and Pepsi amongst others.

In recent years, Karl has concentrated on classical works like The Armed Man and Requiem, both of these albums topped the UK Classical charts. In 2004 he entered Classic FM’s ‘Hall of Fame” at no 8., the highest position for a living composer and has been the highest placed living composer since, as well as, in 2006, no. 4 amongst British composers.

Jenkins’s Gloria is in five movements and takes as its main text the Latin version of the hymn of praise to God from the traditional Christian Mass. Jenkins says, “Gloria in excelsis Deo (Latin for Glory to God in the highest) is the title and opening line of an ancient hymn that begins with the words that the angels sang when the birth of Christ was announced to shepherds in Luke 2:14. Other verses were subsequently added; the Latin translation from the original Greek is thought to date from the fourth century CE. In its present form the text forms a part of the Mass. In addition to its inclusion in innumerable mass settings the Gloria has been set, in isolation, by many composers such as Handel, Vivaldi and Poulenc.

“In my setting of the Gloria the traditional Latin text is set in the first, second and fifth movements, these being entitled The Proclamation, The Prayer and The Exaltation. Further to this I have extended the parameters by incorporating additional text in two further movements: movement III, The Psalm sets Psalm 150 in Hebrew, and movement IV, The Song, is my own adaptation in English of Deuteronomy 32:2, Psalm 144:9 and 1 Chronicles 13:8.

“In between movements, I have selected readings from various ancient religions, each expressing their own concept of the divine or a deity. The detachment of Buddhism, and the paradoxes of Taoism are both alternative ways of perceiving ultimate reality, and they therefore stand as a kind of counterpoint to the Abrahamic religions:

Hinduism: In Sanskrit, a section from the Bhagavad Gita (The Song of the Blessed Lord), the classic Hindu scripture.

Buddhism: Also in Sanskrit, the last section of the Diamond Sutra, the text in the world's oldest dated printed book.

Taoism: In Chinese, the opening lines of the main Taoist scripture, the Tao Te Ching (The Classic of the Way and Virtue).

Islam. In Arabic, the beginning of the Qur'an, the section known as Al Fatiha (The Opening), recited in Muslim daily prayers.”

The second work on the studio album is Jenkins’s Te Deum, composed in 2008. Sometimes known as the Ambrosian Hymn, the Te Deum is an early Christian Latin text praising God. The title is taken from the opening line, Te Deum laudamus, which translates as We praise you, O God. The text has been set to music by many composers, including Haydn, Mozart, Berlioz, Verdi, Bruckner, Dvorák, Britten, Byrd, Tallis Purcell, Handel and Elgar. After the premiere of Karl Jenkins’s Te Deum in Liverpool, the Liverpool Echo described it as “a joyous, theatrical piece of music.”

Born in Wales, Karl Jenkins studied the oboe and graduated from Cardiff University, followed by post-graduate studies at London’s Royal College of Music. A passion for jazz – he was a member of the bands Nucleus and Soft Machine – led him to composition. Classically trained, but drawing on a diverse range of global influences, his composing style has transcended musical boundaries, including memorable ad jingles for Delta Air Lines, the Cheltenham and Gloucester Building Society, De Beers diamonds, British Airways and Levi’s Jeans, the global ‘crossover’ phenomenon Adiemus, more ‘classical’ commissions such as Requiem, Stabat Mater, Quirk and The Armed Man: A Mass for Peace and television and feature film soundtracks.

Recent recordings include Stella Natalis and Joy to the World, Kiri Sings Karl with Dame Kiri Te Kanawa; Requiem and Stabat Mater. In mid-October 2010, EMI Classics will release a special deluxe 10th anniversary edition of The Armed Man: A Mass for Peace, which was commissioned for the Millennium celebrations and was premiered at the Royal Albert Hall in April 2000.

Gloria is the first commission by The Really Big Chorus (TRBC), Britain’s largest choral society, which is made up of singers from hundreds of different choirs all over the UK, as well as thousands of individuals. TRBC is in regular contact with a pool of some 30,000 singers from the UK as well as from Europe, the USA, Australia, Japan, the Middle East and South Africa. They all share a common love of choral singing and the sense of exhilaration that comes from singing wonderful music in the company of like-minded people.

Accompanied by an LSO on top form, the National Youth Choir of Great Britain produce the deep, strong wall of sound needed in the punchier movements, and luscious creamy richness in the second movement. Westenra is a perfect casting...This performance and the overall likeability of Gloria will probably keep Jenkins at the top of most-performed polls for some time to come.

...the music itself may be less innovative than some of Jenkins' earlier work, but it's hard to bear any malice towards something as softly comforting as "The Prayer: Laudamus te", or as urgently involving as "The Psalm: Tehellim – Psalm 150".