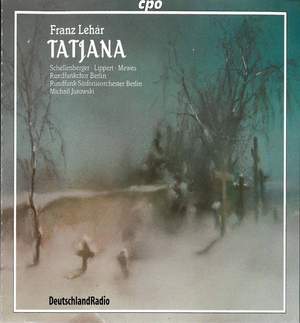 Franz Lehár was a reluctant operetta composer.
His ambitions lay in serious music. When his three-act Kukuška was produced in Leipzig in 1896 he promptly resigned his job as military bandmaster,... — Gramophone Classical Music Guide, 2010 More…

Tatjana is a dramatic love story set in Russia featuring a soldier (Alexis) and a fisherman’s daughter (Tatjana) set in Russia. It is full of enchanting melodies and contains a wealth of wonderful musical ideas. Originally known as Kukuschka, Tatjana was Lehar’s debut composition and although its reception was favourable the work’s subsequent fate was a sad one. Years later, the composer himself wrote: “Nobody wanted to know about this child of my muse, so I decided to forget it.”

Franz Lehár was a reluctant operetta composer.
His ambitions lay in serious music. When his three-act Kukuška was produced in Leipzig in 1896 he promptly resigned his job as military bandmaster, only to resume the drudgery of military service when it failed. Not until 1902, when he was 32, did conducting and composition enable him to give up the uniform for good. He didn't abandon Kukuška but later revised the work as Tatjana, achieving productions in 1905 at Brno, and in 1906 at the Vienna Volksoper. By then Dielustige Witwe had begun its triumphant progress around the globe. Lehár conducted a Leipzig radio performance of Tatjana in 1937; but that was it until the Berlin Radio concert performance in April 2001 that's preserved on these two CDs.
The opera opens on the banks of the Volga in the 1840s, moves on to the mines of Siberia, and ends on the Russian steppes. There, in the snow, the lovers Alexis, a soldier, and Tatjana, the daughter of a Volga fisherman, die together.
Lehár's musical language is very much of its time. There are hints of Wagner, perhaps rather more of Tchaikovsky's own Tatyana in EugeneOnegin, and something of the ill-fated love-match of Puccini's Manon Lescaut. The setting reminds us specifically of Giordano's Siberia. Yet the composer the music most obviously evokes is Lehár himself – the orchestral master who so expertly captured local colour and who could weave instrumental strands into a ravishing orchestral whole.
The performance is very capably done, if with the atmosphere of a concert performance rather than a full staging. Herbert Lippert's Alexis is sung with clarity and brilliance, if a touch short on true passion. Dagmar Schellenberger's Tatjana is a shade too mature, lacking purity in her upper ranges, and yet overall agreeably done. It remains a piece of beautiful lyrical writing, brilliant orchestral colouring and impassioned melody.

The performance is very capably done…it remains a piece of beautiful lyrical writing, brilliant orchestral colouring and impassioned melody. On CD there’s no reason at all why it should not add to the growing appreciation of Lehár as far more than a composer of brilliant popular melodies.