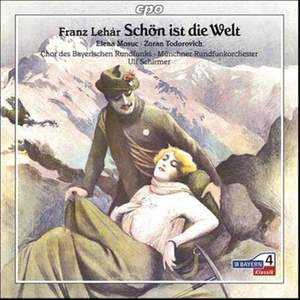 Through-composed operetta? An apparent contradiction in terms, but that was exactly what Lehár succeeded in doing with Act 2 of his 1914 Endlich allein, the score which, revised (but not much... — Gramophone Classical Music Guide, 2010 More…

Originally entitled Endlich allein and premiered at the Theater an der Wien in 1914, this operetta contains one of the rarest and most demanding second acts in the whole history of the genre: one long scene involving only two persons. Lehár was particularly proud of this work, but the operetta public, accustomed to lighter fare, did not pay proper tribute to it; and so he decided to rework it in 1930, now calling it Schön ist die Welt (Fair is the World) but not changing a single note in his beloved Act II. In the meantime he had finally found in Richard Tauber the singer who was ready to storm his musical heights with him, and the title song is a genuine Tauber hit (still assigned to the soprano in the first version). The critic and Mozart biographer Alfred Einstein was enthusiastic about the superb, symphonic quality of the score and in this connection termed Lehár the Wagner of the operetta. Our complete recording of the music (without the dialogues), marking yet another milestone in the Lehár edition initiated by me, gives you the opportunity to hear for yourself just how right Einstein was!

Through-composed operetta? An apparent contradiction in terms, but that was exactly what Lehár succeeded in doing with Act 2 of his 1914 Endlich allein, the score which, revised (but not much in its key central act) as a vehicle for Richard Tauber in 1930, became Schön ist die Welt.
Two royal intendeds, reluctant to commit to an arranged marriage, come together as strangers.
Princess Elisabeth (in 1914 she was an American adventuress called Dolly, but we'll let that pass) and Crown Prince Georg (incognito as an Alpine guide) walk in the peaks, pick flowers, hear over the radio that there are fears for Her Highness's safety, are stranded overnight by an avalanche – and fall in love. At this Lehár throws all the range of his nonpareil orchestral skills, paralleling and anticipating Strauss's AlpineSymphony (written 1914-15) and, in the first of the three sections which comprise Act 2, encompassing an extraordinary rolling road of tonepoem, accompanied recitative and duet, an 'operettic' symphony of singing. The last section of the act delivers both a full evocation of the avalanche and a few-holds-barred love duet.
Acts 1 and 3 – as was Lehár's later model in, for example, Paganini – are pure social comedy, picking up the 'lower' couple of the royal equerry and a tango dancer (taken here by the same singers) and unveiling a Butterfly-influenced duet for Georg and Elisabeth.
As Lehár's career – and his blood-brotherhood relationship with Tauber – progressed, he demanded increasing virtuosity of his principal singers. Elena Mosuc and Zoran Todorovich, names well known in European opera houses, are absolutely assured in style, language and technique.
Their accomplishment is matched by the affectionate, well-scaled conducting of Ulf Schirmer.
Good radio studio sound, too, but once again CPO's booklet lets things down – no libretto; scanty, inaccurate plot summary; incomprehensible English-as-foreign language translation.
Nonetheless, despite the omission of all the witty dialogue (including that radio broadcast) don't hesitate.

Elena Mosuc and Zoran Todorovich, names well known in European opera houses, are absolutely assured in style, language and technique. Their accomplishment is matched by the affectionate, well scaled conducting of Ulf Schirmer (whose singing along matches that of a Barbirolli).

Elena Moşuc and Zoran Todorovich provide some of the best singing in any of these sets (it is a studio recording from 2004), and Ulf Schirmer allows his orchestra to have its moments of glory.