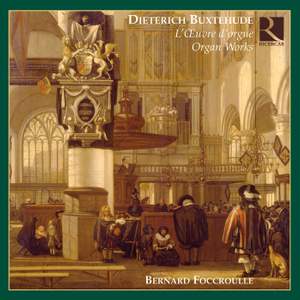 What better way to mark the 300th anniversary of Buxtehude's death in 1707 than with this wonderful box-set? Its 77 tracks reaffirm what a central figure Buxtehude was to subsequent generations... — Gramophone Classical Music Guide, 2010 More…

Buxtehude: Praeludium in A Moll, BuxWV 153

Buxtehude: Praeludium in A Dur, BuxWV 151

What better way to mark the 300th anniversary of Buxtehude's death in 1707 than with this wonderful box-set? Its 77 tracks reaffirm what a central figure Buxtehude was to subsequent generations of Northern European organists working in the German Lutheran tradition.
These recordings (made between 2003 and 2006) are played on two historic Schnitger instruments in the Ludgerikirche, Norden, and the Martinkerk, Groningen, two recent organs in Hoogstraten (near Antwerp) and the German Church, Stockholm, and the reconstructed Lorentz-Frietzsch organ in Helsingor's St Maria Church, parts of which Buxtehude himself played.
The 19 organ praeludia form the core of Buxtehude's organ oeuvre and are considered his most important contributions to the 17thcentury literature. Their quasi-improvisatory flair and brilliance always sounds spontaneous, at times quite extrovert. Foccroulle wisely contrasts them with the much plainer devotional chorale settings. He teases endlessly fresh solo timbres from these striking instruments.
The variety of tuning temperaments keeps the ear alert and the playing is constantly inspiring.
The careful juxtaposition of pieces means that each disc makes a highly satisfying programme in its own right. By way of an epilogue the set concludes with the poignant Klag-Lied for organ and vocal duet. Other complete Buxtehude organ sets have clearly been superseded by this release.