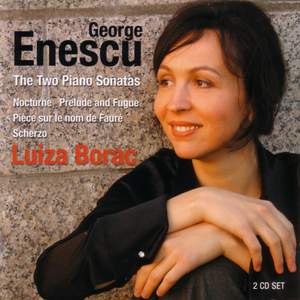 …a set to place Enescu among the great piano composers, superbly played and recorded. — BBC Music Magazine, May 2006, 5 out of 5 stars More…

Luiza Borac caused a sensation with her debut disc for Avie, of Enescu’s Three Piano Suites. The disc garnered unanimous critical acclaim and secured her place on the musical map. Luiza is the greatest living exponent of her compatriot’s endlessly revelatory piano music. For her second offering of Enescu’s solo piano music she has unearthed two works, the Nocturne and the Scherzo, making her survey the most complete available set on the market. George Enescu was “the greatest musical phenomenon since Mozart” according to Pablo Casals. He was boundlessly prodigious yet only 33 works are known to survive, probably the result of his staggering capacity to maintain entire musical creations in his mind without committing them to manuscript. Hence, of his three piano sonatas only Nos. 1 and 3 exist today! Luiza’s empathetic interpretations are themselves a revelation making this an outstanding contribution to the catalogue.

…a set to place Enescu among the great piano composers, superbly played and recorded.

…tone-painting that conjures the subtlest shades, expansive and exotic and, in the hands of a musician as dedicated as Luiza Borac, utterly absorbing. She obviously loves the music and to own these records is to own a standing invitation to a world where impressionism, musical folklore and emotional generosity all play a crucial role.