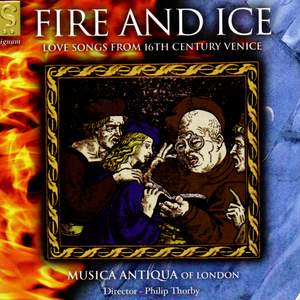 these performances.... communicate an infectious sense of enjoyment and enthusiasm (and) make thoroughly satisfying listening. — The Telegraph, 12/10/2002

In the late 15th century, Italy was divided between the independence of the mighty Venetian Republic and tiny Dukedoms such as Ferrara and Mantua. Music and literature were patronised by the ruling classes as statements of power and local identity. However the most revered European composers were from the north, and their musical style owed little to Italian culture.

In northern Italy an educated classicist, Isabella Marchioness of Mantua, devised the frottola where text was set to a simple melody following speech rhythms, and accompanied by 2 or 3 instruments. The frottola is a Cinderella of Renaissance song and has suffered in comparison with the English and Italian Madrigal and the French Chanson in the 2oth century revival of interest in Renaissance music.

On Fire and Ice we present frottole taken from a Venetian manuscript, compiled around 1520, to argue the case for a re-evaluation of this repertoire. The collection is notable for the quality of both the poetry and the music. The texts deal frequently with emotional extremes - the “fire and ice” of our title!

Modelled on the court bands of the 16th century, Musica Antiqua is the only group in Great Britain to play on specially commissioned matched sets of viols and recorders, copied from 16th century originals. This CD offers a rare opportunity to hear the very different sound these instruments make compared to their "modern" counterparts from the 17th and 18th centuries.

these performances.... communicate an infectious sense of enjoyment and enthusiasm (and) make thoroughly satisfying listening.