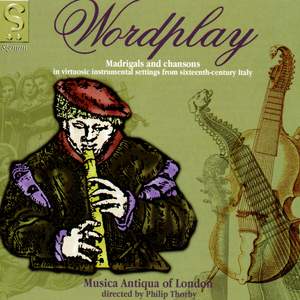 Instrumental versions of madrigals and chansons from 16th century Italy

Words were more important than music in the Italian 16th century and song was therefore a higher art form than instrumental music. Composers such as Cipriano da Rore who observed the natural speech rhythms were afforded the highest accolades.

Wordplay presents a collection of highly decorated vocal music in purely instrumental performance. In the two centuries that this repertoire covers the borrowing and reworking of the music of earlier composers was regarded as creative, original and even as an act of respect or homage.

The disc is structured around instrumental divisions on five famous songs of 16th century and one bass-dance tenor. These divisions are for recorder, for bass viol or for lute. In total 17 different instruments are used including three types of recorder, three types of lute, seven sizes of viol, and a chamber organ.

Wordplay is one of the first recordings made in York's newly opened National Centre for Early Music in the church of St Margaret, Walmgate.