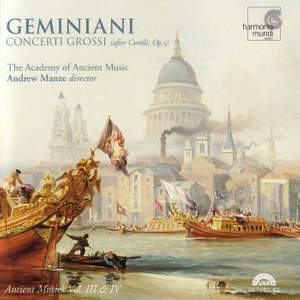 Eighteenth-century English music lovers, it seems, were obsessed with the music of Corelli, in particular his concerti grossi; Manze's notes quote a lovely account of how, when the Op 6 concertos... — Gramophone Classical Music Guide, 2010 More…

Eighteenth-century English music lovers, it seems, were obsessed with the music of Corelli, in particular his concerti grossi; Manze's notes quote a lovely account of how, when the Op 6 concertos were first published in 1714, one London orchestra of gentlemen amateurs, led by a Mr Needler, couldn't stop themselves from playing through all 12 at one sitting. They were Corelli's only published concertos, however, so it isn't hard to see what a welcome sight the works presented on this disc must have been when they first appeared in the mid-1720s; immensely skilful arrangements by Corelli's London-based pupil Francesco Geminiani of the master's 12 violin sonatas, Op 5, they were to all intents a new set of Corelli concertos.
What held for Londoners back then should hold equally well for Baroque enthusiasts today; these ingeniously crafted concerti grossi are a delight, their musical effectiveness in no way compromised by their origins. Listeners familiar with Corelli's Op 5 will doubtless have fun spotting what Geminiani has done with them (which goes well beyond straightforward orchestration); those who do not know the originals can just enjoy the music for what it is, which is to say bright, tuneful and invigorating.
Where Manze's particular success lies is in conjuring the atmosphere of the past and in the sheer joyousness and freshness which these performances convey. It's as if Mr Needler and his friends were before us, revelling in an unexpected Corellian bonus. Listen to the Academy of Ancient Music lustily laying into the thick chords in the final movement of Concerto No 4, dragging back the tempo and then charging off again, and you can almost see the complicit grins on their faces.
Manze is free with his embellishments, throwing in double-stops, blue notes and all manner of flourishes with an abandon that won't be to everyone's taste, but which contributes hugely to the enthusiastic tenor of the music-making as a whole. The orchestra is in fine form, offering a full sound whose occasional slight rawness is no bad thing in performances of such strength, directness and honesty.