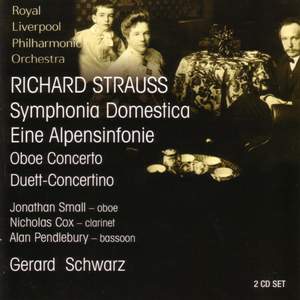 Wandering By The Brook

On The High Pastures

Through Thicket And Briar On The Wrong Path

The Sun Is Gradually Obscured

Calm Before The Storm

The re-launch of the RLPO label in conjunction with Avie Records included this two-CD set of works by the titan of late Romanticism, Richard Strauss. Music Director Gerard Schwarz excels in this repertoire, conducting two personal, programmatic tone poems – An Alpine Symphony exploring the composer’s mountainous adventures, and the Sinfonia Domestica which evokes his family life. By contrast, two late works for winds feature RLPO principals Jonathan Small in Strauss’s late Oboe Concerto, and clarinettist Nicholas Cox and bassoonist Alan Pendlebury in the Duet Concertino. While An Alpine Symphony was previous available, the other three works are new to the RLPO discography.

Gerard Schwarz is a true Straussian and these performances are splendidly idiomatic. Indeed, the Symphonia domestica, that endearing picture of Strauss family life, has rarely been more convincingly presented on record. The glorious Adagio is wonderfully warm and serene, then erupts as the idyll for husband and wife...