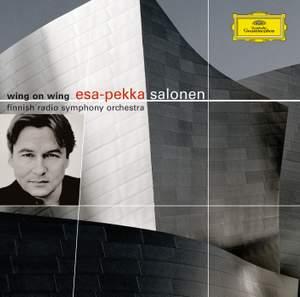 As these three works reveal, the gorgeous or scintillating orchestration is only one of the features that make this music so memorable and instantly appealing. Foreign Bodies is also strongly... — BBC Music Magazine, June 2005, More…

As these three works reveal, the gorgeous or scintillating orchestration is only one of the features that make this music so memorable and instantly appealing. Foreign Bodies is also strongly argued, bursting with energy and full of the kind of ravishing sound-vistas that makes one want to go back and indulge again and again. The performances are stunning (no need to doubt Salonen's credentials as his own interpreter), as are the recordings, which manage to capture a welter of detail without unbalancing the overall sound picture. Recommended.

The immediate sensory impact of these three scores, written between 2001 and 2004, bears out the booklet's claim that for Salonen 'sound first and foremost leads a physical, rather than an intellectual or mental existence'. Would that the densely orchestrated sound and fury which predominates signified something substantial, something truly memorable.
Foreign Bodies, with its governing image of nature under threat, is too amorphous to create a genuinely visceral excitement. The short finale – 'Dance' – works best, with some effective rhythmic cross-cutting, but even this grows clotted in texture: it's too reluctant to expose, juxtapose or superimpose its mechanisms in ways which would bring much-needed light and air to the music.
The 21-minute, single-movement work Insomnia displays a similar lack of differentiation, the great washes of sound more effective in keeping a large orchestra busy than in promoting a persuasive musical argument. Finally there's the 26- minute Wing on Wing, written for the opening of the LAPO's new base, the Walt Disney Concert Hall, in June 2004. Understatement was clearly not an option, and Salonen's overblown hymn of praise aims to celebrate 'a fusion between instrument and body, nature and technology'. The voice of architect Frank Gehry is electronically treated to produce mysterious, oracular sounds, and a pair of wordless sopranos soar ecstatically above saturated post-Messiaen chorales, in tribute to the imagery of wings and sails which link Gehry's building to the nearby Pacific Ocean.
It seems more than a little ironic that this technically imposing recording should have been made in Helsinki rather than Los Angeles.
But the Finnish RSO play magnificently. If you like your music to be 'first and foremost physical', this disc will not disappoint.